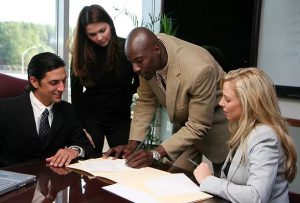 Whether you are a director or secretary of a company or are entering into an agreement with a company it is important to ensure that the company has correctly signed the document.

If a company does not sign correctly then the document may not be binding on the company.

The case of Knight Frank Australia Pty Ltd v Paley Properties Pty Ltd is a good illustration of how strict these rules are. The case concerned a director signing a contract but crossing out the words ‘sole director/sole secretary’ indicating that the purchaser company had another director or secretary that needed to sign. The other director did not sign the contract and the purchaser withdrew its offer. In this case the director who signed was not personally liable as he did not purport to act as an agent for the company but was undertaking just one half of the execution of the contract. Had the director signed the execution clause for agents then he could have been personally liable.

Under the Corporations Act a company can execute a document without using a common seal if it is signed by any of the following:

Tips for ensuring valid execution by a company:

If you have any queries in relation to acting as a director or secretary, signing documents or entering into a contract please contact Clare at Oakhill Lawyers.